Energy-critical elements: Why you should care about chemistry

I went to a talk earlier this week by Robert Jaffe, an MIT physics professor. Jaffe does research on particle physics and quantum field theory, but this talk was on energy-critical elements (ECEs)—chemical elements that (a) are critical for one or more new energy-related technologies and (b) don’t currently have established markets and hence might not be available in large quantities in the future.

For renewable energy technologies, materials availability is particularly crucial because renewable resources tend to be diffuse. Consider solar energy: In a typically-sunny place like the Bay Area, light from the sun reaches the Earth with an average power density of ~200W per square meter. With a record-efficiency 1-square-meter solar panel (and high-efficiency storage), you might be able to power one incandescent light bulb around the clock. Not exactly awe-inspiring. (I recommend LED lighting anyway.) The amount of power we can get from a renewable resource is proportional to the area we can cover with solar panels or wind turbines or tidal energy harvesters, which in turn is proportional to the amount of material we need. To scale up renewable generation is to scale up production of the materials used in renewable generation technology—hence the importance of energy-critical elements.

Here are a few examples of current energy-critical elements and why we care about them:

(3) Terbium (Tb) and europium (Eu) – Used for lighting and displays

(5) Helium (He) – Used in cryogenics and many research applications

(6) Indium (In) – Used as a transparent conductor in touchscreens, TV displays, and modern thin-film solar cells

Keep in mind that the “energy-critical” label doesn’t reflect any fundamental difference in the nature of elements within and without this classification, and the subset of elements designated as ECEs will change as energy technologies and our knowledge of materials availability evolve.

Side note: Many “rare-earth elements” are energy-critical elements as well, but are actually more common in the Earth’s crust than most of the above elements; REEs are “rare” simply because they don’t exist as free elements or in concentrated ores that are easily accessible.

Side note 2: Some unlisted elements (e.g., Cu, Al, Si) are also critical to energy technologies, but they have developed markets, exist around the world—i.e., geopolitical issues have less impact on their supply—and are used in many other applications, such that substitutes could be found for those applications and additional supply made available for energy applications if necessary.

Energy-critical elements might not be available because they just aren’t very abundant in the Earth’s crust—the only part of our planet we can reach right now. The crust is mostly made of oxygen, silicon, and aluminum; all other elements exist in very low concentrations and are often hard to isolate and extract. That said, the absolute availability of elemental resources probably shouldn’t be our primary concern. A more insidious barrier to the development of new energy technologies is short-term disruption in the supply of ECEs. Supply volatility causes prices to fluctuate, which in turn disrupts long-term extraction efforts and hinders large-scale deployment of technologies that depend on ECEs.

What constraints could disrupt ECE supply?

One primary peril is geopolitics. When ECE production is concentrated in only a few places in the world, international politics and trade restrictions may dictate the market, which is bad. Take platinum: The vast majority of global reserves of platinum-group metals are concentrated in the Bushveld Complex of South Africa. Technical, social, and political instabilities in South Africa could thus disrupt the availability of platinum, palladium, and other critical elements. Another example is China’s 2010 decision to restrict exports of rare-earth elements, a market in which China enjoys a near-monopoly thanks to its natural geological advantages. Rare-earth element prices spiked briefly before the market readjusted to the current and future possibility of limited supply.

But despite all the political talk about energy independence, keep in mind that the US currently imports over 90% of the energy-critical elements it consumes, and that’s not a bad thing. Different regions have different comparative advantages in the production of ECEs, and only through trade are efficient markets achieved. Complete ECE independence is simply not possible—e.g., we have no viable source of platinum—and even partial independence is not possible without sacrificing many modern technologies. Consider food markets: Can you imagine life in a food-independent US? We can’t grow nearly enough bananas, mangoes, cashews, coffee, or cacao to satisfy our massive national appetite, nor can we survive without. Why then do we expect full ECE independence?

Another potential risk for disruption lies in the joint production of energy-critical elements—particularly In, Ga, and Te—with conventional ores. Nearly all ECEs are extracted as byproducts of the mining and refining of major metals (e.g., Ni, Fe, Cu) with much higher production volumes and more established markets. The problem then is that the demand for ECEs does not drive production: Their availability is thus constrained by how much of the ECE is contained in the ore of the primary product, and supply is dictated by economic decisions based on the primary product rather than the ECE. This lack of market control renders ECE prices subject to the whims and fancies of major metal markets.

Adding to the uncertainty in ECE availability is the artificially low prices made possible by joint production: Since ECEs piggyback on the mining infrastructure already in place for major metal production, their prices don’t reflect many of the fixed costs of mining and refining. ECE prices will remain artificially low until by-production saturates—i.e., when enough demand exists that byproduct production can’t keep up, making independent mining of the ECE profitable. At that inflection point, however, new energy technologies developed and assessed using current ECE prices may not be able to afford the much-higher true price and will thus fail. One current example is tellurium, which currently costs around $150 per kilogram and exists with ~1ppb abundance in the crust. For comparison, consider platinum, which costs around $150,000 per kilogram despite its ~4ppb crustal abundance. Why is tellurium so cheap? It turns out tellurium is a byproduct of the electrolytic refining of copper, and the large market for copper keeps the supply of the tellurium byproduct sufficient to meet current global demand.

Other risk factors for ECE availability include environmental and social concerns—the refinement of ECEs (e.g., rare-earths) is often a highly destructive process involving unpleasant chemicals, which could make ECE availability subject to environmental policy—and long response times for extraction—it typically takes 5-15 years to bring new mines online, which may be too slow to keep up with the deployment of novel energy technologies.

So what can we do about it?

Large-scale coordination by the government is needed to attack so complex a problem as energy-critical element availability. Providing reliable and up-to-date information on the availability of ECEs to researchers and investors will go a long way toward improving the current situation: With sufficient information, we can shift research efforts toward energy technologies with ECE needs that coincide with ECE availability.

Another potential response is to increase efforts to recycle ECEs. Recycling all ECE-containing products could reduce our dependence on new resources. Consider cell phones: Modern mobile devices contain 40 or more chemical elements—the majority of known radioactive-stable elements—and most end up in the back of desk drawers at the end of each 2-year contract cycle. But recycling isn’t a feasible option when considering any growth in the market size, much less exponential growth. Assuming the same efficiency of use over time—e.g., the same amount of Te will be needed to produce a CdTe solar cell with a fixed power output now and 20 years from now—recycling can never keep up with increasing material demands, even with 100% recycling efficiency.

The take-home message: Many new energy technologies rely heavily on a subset of chemical elements (e.g., He, Li, Te, rare-earths). These “energy-critical elements” (ECEs) are not currently produced in large quantities, and thus their future availability is highly unpredictable and dependent on complex economic, environmental, and geopolitical factors. A shortage of these elements could inhibit the large-scale deployment of promising solutions to the world’s energy needs. We need more people and more money dedicated to identifying potential substitutes, informing researchers and the public about ECE issues, and improving the efficiency with which we extract, use, and reclaim these elements.

Check out the full APS/MRS report if you’re interested in finding out more! 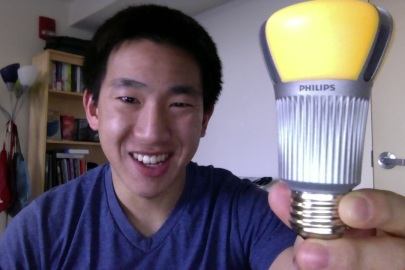 Me and my LED light bulb.

One thought on “Energy-critical elements: Why you should care about chemistry”

What are you thinking? Cancel reply