A couple weeks ago, I ran the Reach the Beach Relay, a 200-mile footrace across Massachusetts. I’d never met anyone on my team before 9AM that Friday morning, when we gathered across from the Stata Center on Vassar St. at MIT to pile into two Dodge Grand Caravans and make our way into the wilderness beyond Greater Boston. A trunk already packed high with Nutri-Grain bars, fruit snacks, and Gatorade was further burdened by my duffel bag packed with running shoes and bananas.

I was enlisted for this drama by my labmate Christina, who knew a team of MIT chemists (“12 Angry Scientists”) looking for a happy engineer to fill out their roster. I had no idea what I was getting into, but signed up on a whim months ago, then promptly forgot about it in favor of working on my masters thesis. The morning of the race, I turned in my completed SM thesis to the EECS department and clambered into Van 2 carefree.

What it takes to feed 12 scientists for a day.

Twelve team members all accounted for, we headed to Wachusett Ski Resort in central Massachusetts, where we were subjected to a team picture and a quick orientation (“Wear reflective gear at night. Don’t stop in the middle of the road. Recycle. Drink beer—but not too much. Please do not answer ‘nature’s call’ on private or town property.”). The race would be broken into 36 legs of up to 9 miles each—3 legs per person—with a slap bracelet serving as a progressively sweatier relay baton to be passed (slapped?) from runner to runner at the transition areas. Each 6-person van would roll through their full lineup—around 4 hours of running—before handing off the baton to the next van, then rinse and repeat. We would run through the night, through forest and farmland, along highways and dirt roads, until we smelled seawater at the Atlantic coast. 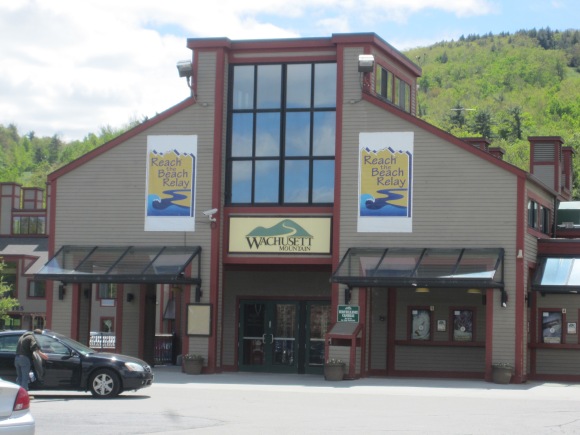 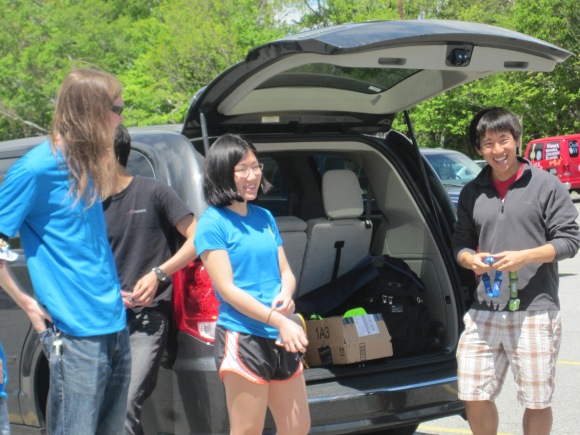 Faster teams are assigned a later start time so that all the teams end at around the same time, making for a more dramatic finish. It turns out angry scientists = fast runners: we were one of the last teams to get going, 5 hours after the first team started their voyage. At 1PM, our lead-off runner Dan lined up at the start line at the base of Mt. Wachusett. The chair lifts are there for a reason—that reason apparently does not apply to runners. Dan’s 2.8-mile leg was a black diamond trail run in reverse, with 1.7 miles up the mountainside and abundant cursing. But back in Van 2, we had 4 hours to kill before our first leg—we cheered on our Van 1 teammates during their runs by blasting high-quality music like Call Me Maybe and Taylor Swift with the windows down, then stopped for a lunch of turkey sandwiches at a roadside convenience store in the middle of nowhere. 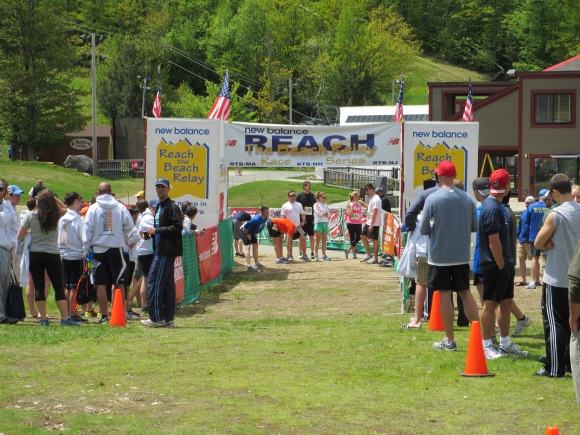 By 5PM, we were getting antsy in Van 2. After getting all pumped up to start the race, repressing the adrenaline for hours took more self-control than I could muster. So I gave up and took a nap:

8th in the Angry Scientist rotation, I woke up to grab the baton from #7 Jen and run my first leg, 7.53 miles from Worcester to Boylston. I knew I went out way too fast but couldn’t help it—it was one of the first hot days of the year, I’d been sitting in front of a computer writing a thesis for the past month, and a mile in I was panting like an overexcited puppy. Smooth. Luckily there was no one around to see me self-destruct—my teammates helped with some drive-by dance music—and after 52 minutes of contemplative misery, I rolled into transition area 9 under my own power.

Apparently my preparation was lacking; I’ve run a few marathons (26.2 miles) and half-marathons (13.1) over the years, so I was ready for a calm 7.5- or 8-minute-per-mile pace. Although my total distance here (~22 miles) was similar to a marathon, it was split up into three frantic 6-8 mile races, so I felt compelled to run hard from the get-go rather than pacing comfortably and running to finish. Getting used to the pace was the second-hardest part of this race. The hardest was timing: When to eat, when to drink, when to sleep, when to stretch, when to get warmed up, and—most importantly—when to take a seat on a nearby toilet. No joke. Coordinating alimentary intake and inevitable emission over 24 hours of running is an engineering task far beyond my abilities. Our team captain Kit solved the problem in finest MIT fashion: He simply contracted food poisoning, so that everything he ate came right back up—no need to digest. Brilliant.

Slapping on the baton for my first leg.

#9 Andrew booking it down the home stretch.

The rest of the race passed by in a blur of sleepless zombie running, insane cheering, dance music, and sweat. We ran over the proverbial river and through the woods and all through the night—creeping up in our van and whispering soft nothings at our runners instead of shouting encouragement—with a brief recess at a local hotel.

Stopping for a late-night dinner of spaghetti and meatballs. 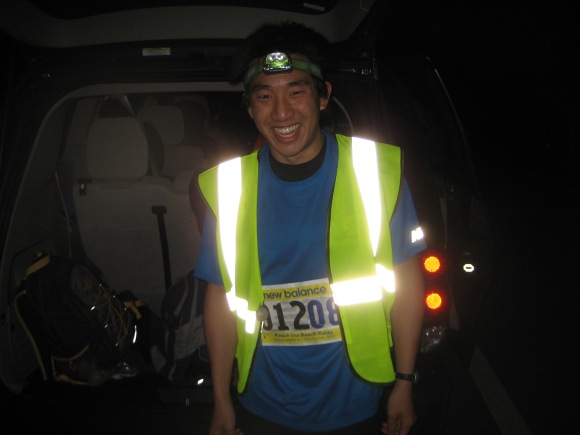 And… back to running, nighttime edition. 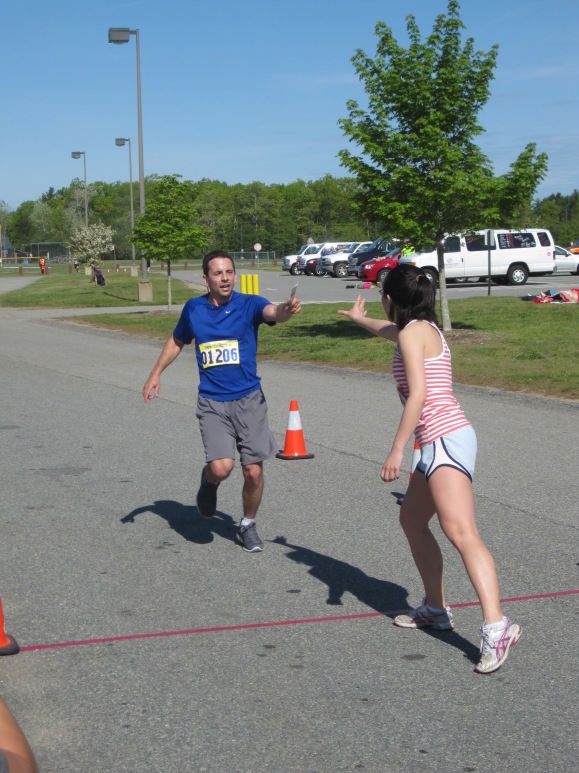 The next morning, 160 miles in, we finally saw a proper hand-off. 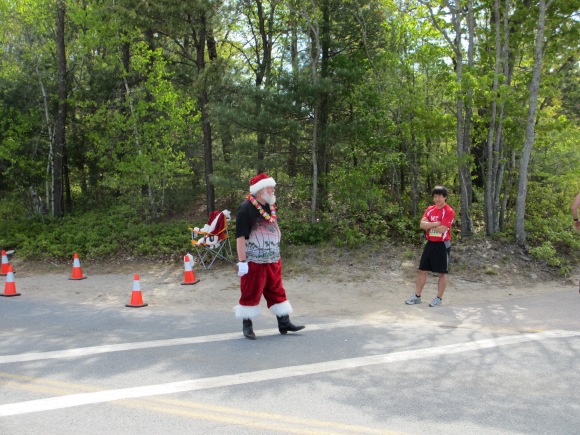 Why is Santa Claus here? Not impressed. 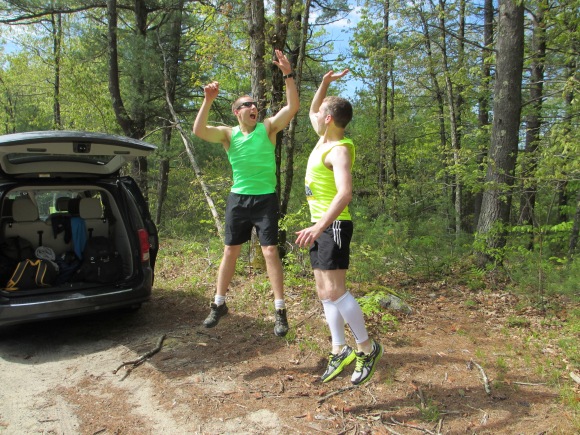 Thanks to our late start and relative speediness, we passed progressively more competing teams as the race dragged on (I passed ~20 people in 3 legs, and was passed once myself, by an old guy who left me in the dust with his relentless uphill pace). Of particular intrigue was a team named GURL Boston All-Stars, composed of all guys. They were a mystery, and they were fast. At the last transition area, after 192 miles and 24 hours of running, the anchor for GURL Boston stepped into the hand-off zone wearing a short leopard print dress and carrying a clutch purse. Turns out GURL = Gay Urban Running League. As we passed their anchor—the guy had to be running sub-6:30 pace—our van started blasting It’s Raining Men (complete coincidence, of course) with the windows open. He pranced and blew kisses and mimed his thanks, hands to his heart, still running at top speed. What a team. 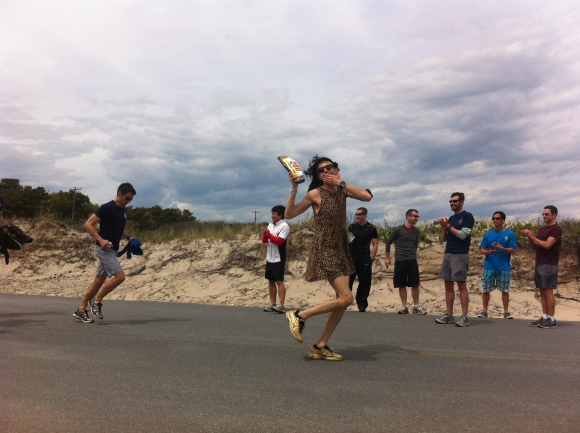 Our van pulled into Horseneck Beach in southern Massachusetts around 1:30PM on Saturday, with our intrepid driver and final runner Yifeng in hot pursuit. 12 Angry Scientists joined in for the last 100 meters of the race, crossing the finish line after more than 25 hours in transit. We were met with medals and Boloco burritos, and drove back to Boston in delirium.

Reach the Beach 2013 exceeded all my expectations for a relay race. Running for and with a team is infinitely more fun than running alone: you can cover a lot more distance, you get to travel with a built-in fan base, and there’s always someone around to feed you. This particular race was an incredible opportunity to get out of Boston and explore the New England countryside in all its glory: I’ve now used Porta-Potties all across Massachusetts. Who’s in for next year? 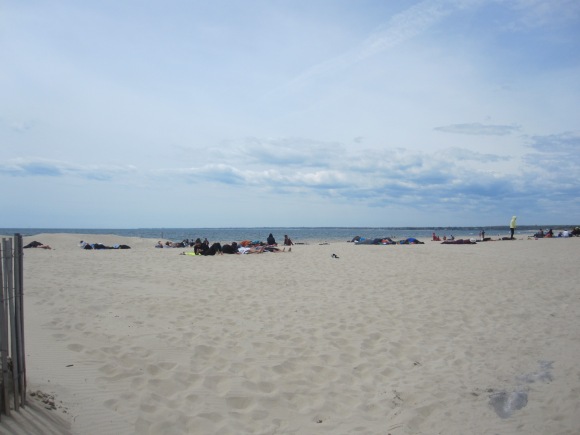 The whole team at the finish: Scientists do it better.

The photos in this post were taken by me, Andrew, Jen, and Monica. Thanks!